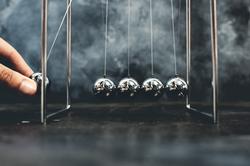 Momentum is defined as “mass in motion.” All objects have mass; therefore, if an object of mass is moving, then it has momentum.

The amount of momentum an object has depends on two things:

1. The weight of the object that is moving.

2. The speed of the object that is moving.

In terms of an equation, the momentum of an object is equal to the mass of the object times the speed or velocity of the object.

Momentum can also be measured by its direction. This is called linear momentum because now it has direction as well as magnitude.

Momentum occurs when a force that is greater than the resistance to the object is applied.

Momentum is a conserved quantity, meaning that the total momentum of any closed system (one not affected by outside forces) cannot change. Here on Earth, gravity is the outside force that comes to mind for most of us. Gravity is the force that gives weight to objects and mass on Earth. The Earth’s mass creates a gravitational pull on all objects near its surface. Anything on or near the surface of the Earth such as planes, trains, and automobiles, must use a force that is greater than gravity for them to begin to move, and to keep moving. Once they are moving, they have created their own momentum. In order to sustain this momentum, the forces that started that momentum must continue to operate, or momentum will decrease and eventually stop.

Momentum is a force more powerful than we realize and it greatly affects our lives. Yet, it’s not something that we consciously ponder or try to figure out.

As we address momentum in ministry, remember that it always takes an outside force for momentum to start, maintain, and to stop!

In these lessons, we will address and discuss the outside forces that constantly threaten the continuance of momentum in the Church.

The Force of Momentum

Yet, it is rarely talked about.

· The loss of momentum takes place in churches daily all around the world.

· A minister with great passion and vision will experience only so many disappointments and frustrations before they give in to discouragement, even doubting themselves and their calling.

Whether it is a job or a ministry, we must realize that it takes a concentrated effort or force to create that job or ministry.

· Someone has to think it through.

· Somebody has to organize and put all the pieces together.

· Somebody has to create a system of action that will propel the ministry forward.

· Then someone must assume the position to maintain that ministry.

Without that person, momentum will decline.

New ideas excite us. Most ministers are enthusiastic about new ministries.

· We love to hear success stories because they encourage us to try the same things in our own churches.

· We go to conferences and hear another pastor talk about the great success or growth within his church.

· Excitedly, we listen as the minister explains how and why that growth occurred.

· Eager about the possibilities for our own ministries, we return home and tell our leaders and congregations what we have learned.

But here’s the problem:

If someone lacking the vision and burden to create the momentum tries to duplicatesomeone else’s success, it often fails.

Because that pastor may lack the energy and passion it takes to create and maintain the kind of momentum the first pastor had.

As a result, failure breeds discouragement, and that despair replaces his good intentions.

Those of you who have been in the ministry for any length of time realize how hard it is to gain the support of your congregation for a single thought or new idea.

· By now, you know that people seldom get on board with a new vision immediately.

· It takes months, and sometimes even years, for an entire congregation to get behind its pastor or leadership team’s vision for a church.

· Experts claim that it takes almost six years for an individual to feel as if the pastor is theirpastor.

Given that statistic, how much longer does it take for the whole congregation to get behind that pastor’s passion and vision for the church?

· During the sermon, folks get excited.

· As the pastor explains the new vision or area of ministry, people will clap their hands and say “Yes!” and “Amen!” to everything.

Yet, in the months following, the pastor realizes that his or her congregation wasn’t as supportive as he/she originally thought.

· People are emotional; however, work (the force) is seldom accomplished through emotions.

· Work is accomplished when people make a conscious decision to help implement change in their churches or communities.

Only when a person makes a conscious decision to support the leadership, will they do whatever it takes to maintain the momentum in that ministry.

· They will give financially.

· They will give of their time.

· They will give of their talent.

And they will continue to give until they are either told to stop, or until something happens that causes resistance to the momentum.

This is an excerpt from chapter 1 of Momentum In Ministry. If you are tired of seeing your church build but then lose ministry momentum, its time to do something about it. Stop wasting your time and energies. Empower yourself and your ministry today