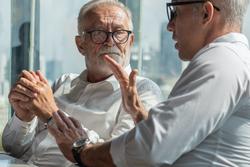 Your life is not measured by your accomplishments, but rather by the people you’ve touched and the lives you changed.

Mentoring someone allows you the opportunity to affirm their ministry and change the direction of their life.

You don’t have to wait for someone to ask you to mentor them.  Pull them aside and explain to them that you see potential in them and you believe they are ready to be mentored.  You may be amazed to find that they have been waiting on SOMEONE to notice them.

Don’t judge – Critique.  The difference between the two is one is done out of love and concern the other is not.  Let your aspirant know that you care only for their growth and want to offer suggestions for them to become better.

Open up.  Tell them of your early shortcomings.  Let them know that all is not going to be easy.  Confess a few faults and ways you have conquered them.  There is nothing common to man.  There is a great possibility that they may need to know how to get over a few things along the way.

Model it in front of them.  They are going to do what you do – not what you say.  Regardless of how well you explain things to them, they are going to model themselves after your actions.  You speak to them when you are not speaking to them at all.  Remember they are watching you and learning.

Meet with them.  Choose definite times to meet together.  Doing this tells them that you care about their growth and are concerned about them as a person.

Let them know when they do good.  In this world that we live in, people seldom get affirmation.  When you tell most people they are doing something well, they will try harder and do better the next time.

Think about those who have touched your life.  How did they do it?  What did they say to you that gave you direction or hope?  Do these same things to those whom you mentor.

Early in my second year of bible college, I found myself very discouraged and about to give up on the idea of training for the ministry.  I had a new wife and a baby and at the young age of 20 was over my head financially.  The best solution I could think of was to end my ministerial schooling and get a job to support my precious family.  I had been thinking on this for several days when a man ( I did not know Fred Foster before this moment.) from the large church I attended, came up to me and explained to me that the Lord had impressed him to pray for me specifically.  He let me know that God had let him know that I was discouraged and that I was about to give up on the notion of being in ministry.

Fred became a giant in my life that day.  I owe him a debt of gratitude I can never pay.  Fred was not a preacher.  He was however genuinely concerned for me and that concern changed my life.  I did not leave school, but went on to graduate.  Almost 30 years of ministry later, I still get discouraged from time to time, but I’m thankful that the Lord puts people like Fred Foster in my path to let me know that God is in my corner and that I can make it.  Encourage your protégés!