Can You Turn a Loser into a Leader? Part 2 - Preachit.org

Can You Turn a Loser into a Leader? Part 2 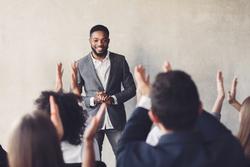 The Power of Mentoring

Mentor was the name of the advisor to Odysseus, King of Ithaca and victorious leader of the Greeks in the Trojan War. So respected was he and so valuable was his guidance that his name has been borrowed to mean any wise and trusted counselor.

Most of you have had a mentor in your life at one point or another. Most successful people have benefited from a relationship with an individual who served as a counselor. It is a process that we have all gone through, but what gives a mentor success? What is it that makes him or her someone you should or would listen to?

A mentor is somebody who sees more in you than you can see in yourself.  Jesus was a mentor to the twelve in the truest sense of the word. Jesus saw greatness in each of them, but he didn’t stop there,  He began to lead, mold and shape them into the potential that He saw in them.

Jesus saw them as they could be. Jesus didn’t focus on their mistakes and shortcomings. Jesus focused on their strength, their power, and their potential. Jesus told them things that reaffirmed their potential. He showed His confidence in them by building them up and reinforcing His belief that they would go on to do great things.

18 And I say also unto thee, That thou art Peter, and upon this rock I will build my church; and the gates of hell shall not prevail against it.

50 Jesus answered and said unto him, Because I said unto thee, I saw thee under the fig tree, believest thou? thou shalt see greater things than these.

51 And he saith unto him, Verily, verily, I say unto you, Hereafter ye shall see heaven open, and the angels of God ascending and descending upon the Son of man.

12 Verily, verily, I say unto you, He that believeth on me, the works that I do shall he do also; and greater works than these shall he do; because I go unto my Father.

13 And whatsoever ye shall ask in my name, that will I do, that the Father may be glorified in the Son.

To all of the disciples Jesus said;

15 Henceforth I call you not servants; for the servant knoweth not what his lord doeth: but I have called you friends; for all things that I have heard of my Father I have made known unto you.

16 Ye have not chosen me, but I have chosen you, and ordained you, that ye should go and bring forth fruit, and that your fruit should remain: that whatsoever ye shall ask of the Father in my name, he may give it you.

Over a period of three years, the disciples thinking began to change because Jesus was a credible mentor to them.  Jesus proved His words to be true and they eventually started believing everything that Jesus said. Jesus convinced them of His own vision by expressing His confidence in them. He let them know that He trusted them with His Church. People need to feel your trust. People naturally move in the direction of praise, and they move away from harsh criticism. The disciples needed to hear these words of Jesus. Especially coming from their background in Galilee. They didn’t feel like they could measure up to the religious elite of their day. They had no confidence in themselves. They had been nobodies their entire life. Jesus had to pull them out of that type of thinking. It took years of positive reinforcement to do that. You cannot lead people by devaluing them. You have to lead through praise and confirmation. There will be times you have to share constructive criticism with your leaders, but for the most part you will have success in changing people by motivating them in a positive manner.

The changing power of the Holy Ghost

Having said that, Jesus was very clear to His disciples about the things that He had taught them. He taught them those things so that they would remember them when He was gone. They had something they could hold on to. They had some experiences they could call to their memory when needed.

4 But these things have I told you, that when the time shall come, ye may remember that I told you of them. And these things I said not unto you at the beginning, because I was with you.

Once they understood that, Jesus went on to say;

5 But now I go my way to him that sent me; and none of you asketh me, Whither goest thou?

6 But because I have said these things unto you, sorrow hath filled your heart.

7 Nevertheless I tell you the truth; It is expedient for you that I go away: for if I go not away, the Comforter will not come unto you; but if I depart, I will send him unto you.

What Jesus was saying to them was, “Hey guys, I have taught you a lot of things, I have showed you the path I want you to take, I have brought you a long way from where I found you. You are thinking differently than you were three years ago. But now it is necessary that I go away. If I don’t go away, the Comforter (Holy Ghost) will not come. This change in you will not be complete until the Comforter comes to you! I know you don’t want me to leave guys, but I have to leave, this has to happen!” Jesus knew that the change in them would not be complete until they were filled with the Holy Ghost.

As pastors and leaders we must realize the role that the Holy Ghost plays in changing people. Yes, we need to mentor. Yes, we need to lead. Yes, we need to be a positive role model. We need to do everything  that we can do. But that will only take people so far, the transformation in people will not be complete until the comforter comes to them. They need the Holy Ghost in them to transform their way of thinking. This is God’s plan to change mankind. This is the only way you can ultimately change a loser into a leader!

These ignorant and less than ordinary men became Apostles and went on to build God’s church on this Earth. Everything that Jesus said they would do, they did. It is up to you to do everything you can do to mentor people, but don’t try and do what you can’t, let God take care of that. The Holy Ghost will cause change to happen.

I leave you with a powerful word from the Apostle Paul;

9 But as it is written, Eye hath not seen, nor ear heard, neither have entered into the heart of man, the things which God hath prepared for them that love him.

10 But God hath revealed them unto us by his Spirit: for the Spirit searcheth all things, yea, the deep things of God.

11 For what man knoweth the things of a man, save the spirit of man which is in him? even so the things of God knoweth no man, but the Spirit of God.

12 Now we have received, not the spirit of the world, but the spirit which is of God; that we might know the things that are freely given to us of God.

13 Which things also we speak, not in the words which man’s wisdom teacheth, but which the Holy Ghost teacheth; comparing spiritual things with spiritual.

14 But the natural man receiveth not the things of the Spirit of God: for they are foolishness unto him: neither can he know them, because they are spiritually discerned.

The Holy Ghost teaches us the ways of the Spirit! Just one more reason why everybody needs the Holy Ghost!

Give it a try — download a free sermon today!